Pectus deformities and treatment, not available on the NHS

Pectus or chest wall deformity refers to a relatively common condition where the chest appears irregularly shaped.  There are two main types of deformity: Pectus Excavatum (Sunken chest) and Pectus Carinatum (Pigeon chest) but there are many more complex types or ‘mixed’ pectus deformities as well as other chest wall problems both congenital (born with) and acquired (caused by for example trauma or previous chest surgery).   Pectus deformities are common with pectus excavatum affecting roughly 1 out of 400 children and pectus carinatum occurring in approximately 1 out of 1500 children. In both types, boys are affected more commonly than girls.

Unfortunately in todays cash strapped NHS, the correction and treatment for pectus deformities, are limited to those with impaired lung functions only.  There are treatments available and certainly for young patients, Pectus Carinatum can be treated with a “brace” to reposition the chest defect with a non-surgical treatment.  More information on pectus defects and treatments are available from www.pectusclinic.com

For patients with Pectus Carinatum , the use of the compression wraps, either the #510-3 or for younger patients, the facial garment #210 are ideal for maintaining the shape of the lower ribs and preventing displacement of them whilst wearing of the brace. 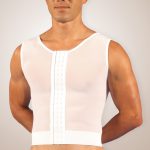 For Pectus Excavatum, after corrective surgery, the #640  Adjustable Compression vest with hook and eye front closure is ideal.  This can be followed up by wearing of the second stage garment, #1240 Compression vest which maintains compression from the mid-line out, which is designed to help reduce seroma, a common occurrence with this type of surgery.